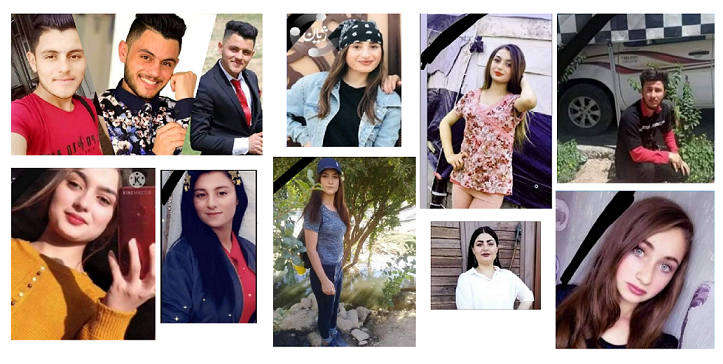 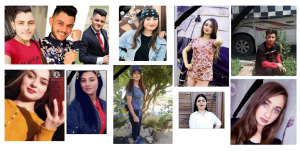 A veritable suicide wave is plaguing the Yazidi community in northern Iraq. Since the beginning of 2012, 12 young people committed suicide. The causes are to be found in the lack of proper psychosocial help, unemployment, hopelessness, and half a decade living in tents. The political wrangling between various parties for control of Sinjar means that few return. 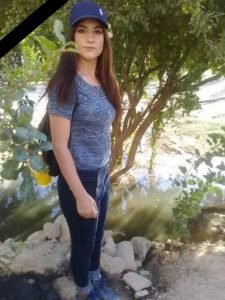 The young woman in the photo above is named Zina Haj Khidir. She was in her twenties, in the prime of her life, and committed suicide yesterday in her village of Guhbal, in the north of Mount Sinjar. And she is, unfortunately, no exception in this regard.

Since the beginning of 2021, at least 12 cases of suicide have been confirmed among Yazidi youth, especially in the camps for displaced Yazidis in Duhok province. Eleven of them committed suicide in just ten days, most of them young adults and twenty-somethings. This shows that the suicide rate is on the rise in this community, which has been horribly targeted by IS’s terror campaign.

The Yazidis of Sinjar (and their Arab and Kurdish Sunni neighbors) lived in peace until August 3, 2014. On that day, a genocide against the religious and ethnic minority began, with many men brutally murdered, and the women conscripted as slaves. However, since the 2014 genocide of the Yazidis, most Yazidis are still displaced and unemployed today, with too many hours to fill and a lack of psychosocial support, leaving them largely unable to process their traumas, and with very little sense that their lives can get better again.

Only a small portion of their community has returned to their homes in Sinjar; the vast majority still reside in refugee camps in northern Iraq. Traumatized and displaced is obviously a recipe for misery. And these people are therefore in dire need of help.

Psychosocial help for the Yazidis

Currently, a psychologist known for his work with the Yazidi community in Germany, Jan Ilhan Kizilhan, is investigating the possible causes of the increase in suicides. Kizilhan heads the Institute for Transcultural Health Research at the Cooperative State University of Baden-Württemberg, Villingen-Schwenningen. Kizilhan has criticized the government of the autonomous Kurdish region of northern Iraq for not doing enough to address the needs of Yazidi refugees in their area. According to his organization, more than 100,000 Yazidis currently reside in northern Iraq, far away from their homes.

“Life in the refugee camps, the politically uncertain prospect of a better life, as well as the economic and social problems – also the restrictions related to the current Covid-19 pandemic – increase the psychological stress, which is the reason why some people, especially young women, commit suicide.”

“The Yazidis have not yet recovered from the genocide and are facing a rift in their community, which is also reflected in the increase in suicides. It is a signal, a cry for help that is not being heard. Every suicide is a tragedy and suicides are preventable.”

Doctors Without Borders had also previously pointed to a debilitating mental health crisis among the Yazidis in Iraq, including the rising number of suicides. 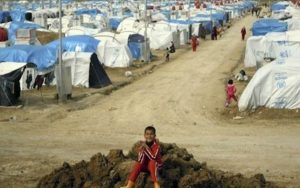 The community seems to be heavily victimized by political tensions, which has become the reason why the majority of Yazidis have still not returned home.  Instead of organizing psychological support for the communities and rebuilding destroyed homes, hospitals and schools, both Iraq and the government of the Kurdistan Region seem more concerned with gaining control there.

The region itself is now host to several militias, such as the Kurdistan Workers Party (PKK) and its affiliated wing YBŞ, which is made up of local recruits.

The Iraqi central government and the Kurdistan Regional Government (KRG) signed a UN-led agreement on Sinjar in October 2020 to remove these militias, including the PKK, from the region and restore federal authority. Little has come of this so far, as the groups involved have shown little inclination to leave their areas of influence. And this in turn drew the attention of Turkey, which sees the PKK as its global enemy.

On January 22, President Recep Tayyip Erdoğan uttered his famous phrase, “We can get there overnight, all of a sudden,” which he had used shortly before Turkish counterterrorist operations in northern Syria. According to foreign policy experts, Turkey may in fact launch new operations in Sinjar as early as spring.

In the same week, Turkish Defense Minister Hulusi Akar visited Baghdad and met with Iraqi officials before heading to Erbil, where he spoke the next day with Kurdish officials, including Kurdistan Prime Minister Masrour Barzani and the President of the Kurdish Region Nechirvan Barzani.

A long way to go

The threat of yet another attack on the already devastated region does not help Yazidi refugees scattered across northern Iraq to look optimistically at the future and possibilities of returning home. “Haggling” between the various parties claiming control of the region is certainly not helping the people either. Apart from a few small NGOs, “the West” is also not doing anything to reduce the suffering of an already traumatized people, although it still regularly features the Yazidis in its media.

Concerns about the psychological well-being of the Yazidis seem to be the last priority of all parties involved. Surely return, reconstruction and security seem to be the basic requirements for this, and unfortunately they are still lacking. As long as the lion’s share of the population remains in tents, unemployed and uneducated, this community can hardly move forward. The Yazidis clearly have a long way to go before they can heal from their traumas. 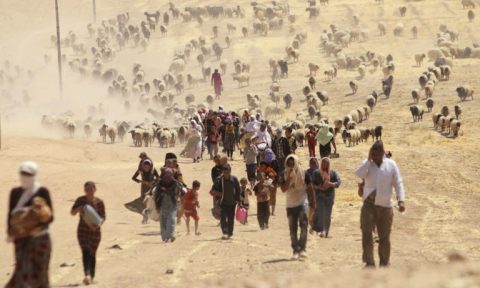