PKK pretends to have freed the Kurdish women and tries to portray them as an example so as to export its ideaolgy to the Western countries. The following analysis is on the real situation on the women in the PKK and its branches:

The PKK/KCK, seeing the benefits of involving women in its terror campaign, has created its own female terrorist organization to place women in the center of their rhetoric and uses Internet to communicate this rhetoric with its target audience. But is the use of feminism really a piece of the party’s ideology, or did it evolve as a new strategy?
Today Kurdish women seem to have gained substantial equality in the PKK, and the Party’s ideology actively promotes a subversion of traditional gender structures.
I will give a nuanced view of the progressive transition of the PKK’s political ideology on women. During the early 1990s, the PKK’s emancipatory stance and reinterpretation of Kurdish myths were employed pragmatically to increase women’s participation. However, patriarchal structures remained unchanged and female militants were merely handed over from a patriarchal family to a patriarchal party.
Despite this, the autonomous Women’s Army (YJAK) became a “safe space” from which self-organized and armed women actively influenced the PKK’s ideology and practice. Legitimized by the PKK’s own emancipatory propaganda, the YJAK pushed the party towards a more radical feminist agenda by loyally aligning themselves to the “father figure” Öcalan during setbacks in the late 1990s.
But how did this happened? And to which goal? People did not find it meaningful to join an illegal organization, commit crimes and change the social order. Instead, they preferred the security provided by their tribes and families. For those reasons, the organization was unable to recruit an adequate number of militants in its early stages between 1973 and 1990. Abdullah Ocalan, who wanted to overcome this dilemma, saw Kurdish families and tribes as the primary obstacles that hampered PKK recruitment. He recognized that feudal family and tribal structure had to be dissolved and disbanded in order to recruit new members. While one way to accomplish this was to force the evacuation of villages, the other was to change the social status of women, who were at the bottom of the tribal hierarchy. Through this practice, the traditional tribe and family system dispersed and adherence and loyalty of individuals to those structures ended. As the party substituted the tribe, Ocalan, as the leader of the party, replaced the tribal leaders.
The 90’s have seen the largest numbers of recruitment by the PKK and their shortage of militants seemed to be solved. Larger groups of women joined the terrorist organization’s ranks. This shows us that the recruitment of women was at that time perhaps instrumental, looking at Ocalan’s goal to mobilize more troops.
Women at that time assumed two different roles in the PKK. Some of them took part in military activities, while others worked for its various front organizations. Primarily, the younger women were charged with military duties, whereas the others were charged with front organization duties. In the early stages of the PKK, female militants carried out military operations together with male operatives, but as their numbers and incidents of sexual harassment increased, some changes have been made. Although sexual harassment incidents were punished severely at first, in time women and men were just separated from each other
The PKK’s increased use of female militants is a concerning development since women provide great potential for both propaganda and recruitment, and they often have better access to certain soft targets. Tasks they would slowly slip into.
The current prominence of the PKK’s feminist agenda suggests female militants can undermine and challenge patriarchal structures from within the structure of a nationalist movement. But this is really not the case. The PKK has just divided men and women in two different military bodies, two different entities. From KJK and KCK, from HPG and YJA-star, to YPG and YPJ, women and men are seperated from eachother. So much for working together in equality. If gender equality would be really reached, the two sexes would be able to co-participate in harmony. Why seperate men and women?
Let’s look at the ways women in the PKK are used for propaganda, media attention and external support. Highlighting women’s participation is often used to attract greater attention from external audience, increase the perceptions of the legitimacy of the cause and induce sympathy for the group. The effectiveness of images of female guerrillas in attracting attention and soliciting support has not been lost on the organization’s leadership. In fact, with the siege on the Syrian city of Kobani they have started to fully exploit this. It only takes you five minutes on social media to see hundreds of pictures and videos of attractive young women (16-30) posing with guns. The same can be seen on the party’s television channels.
Let me conclude: ● Women were mainly recruited to mobilize more troops in the late 80s and 90s. The organization’s ranks swell with larger numbers of women. Male recruits
increased as well, mobilized by female recruiters and the attracted by the idea there were also women there. Thus, the idea of a mountain romance grew. ● As numbers grew and both sexes could not work together as well as promised, the leadership formed seperated entities for the sexes to work seperately. ● Women are used for recruitment tasks, as they could easier reach soft targets. ● Women are used for propaganda, as they attract more media attention, sollicite more support, and increase the idea of legitimacy of the cause.
We can conclude that the recruitment of women in the PKK has mostly had a strategic reason. The ideology to support this strategy was formed later on. Women are still exploited in this organization, as they are used for propaganda means. There is no real equality between the two sexes as is said, since separating sexes does not lead to real equality and is impossible to implement in society.

Previous « Terrified SDF betting on two horses
Next Zeinab Jalalian, an accused or a victim? » 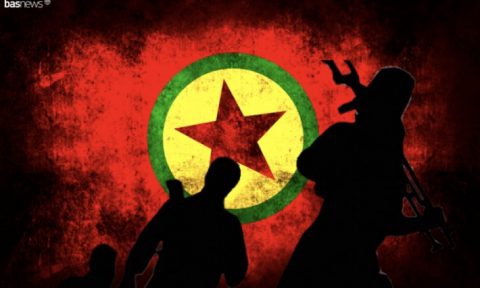